Why your designer asks “why”

During initial planning meetings, there is an inevitable moment when you say you like something and your designer turns to you and asks “why?” Sometimes this can feel like a challenge or a judgement, but it’s not!

For a designer, the reasoning behind your decisions is as important as the decision itself.

When considering the choices for your design, we are taking many different things into account, and knowing why you liked something can help us prioritize and choose between the many possibilities in the project.

A good designer will give you what you want, not what you ask for

Finding the reasoning behind clients’ choices can mean the difference between a space that is exactly what they want, and a space that while adequate, falls flat.

Finding the why in a Toronto kitchen reno

Toronto is filled with great, old houses whose locations are fantastic but whose interiors don’t always suit the needs of modern families. One family I worked with was redoing a cramped and poorly laid-out kitchen. They had many hopes and visions, including the rather unusual one of keeping the old upper cupboards that were in good condition. 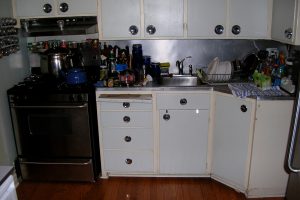 The bottom cupboards needed to be replaced, but the client wanted to keep the upper ones.

Now, the easiest thing would have been to rip them out: it would have solved a couple of design problems, but the clients simply said “no.” By asking them “why,” I found out that they wanted to keep some of the flavour and history of the house, they wanted to re-use elements that were in good shape for environmental impact, and they appreciated the quality of the construction.

Their reasoning was important to all aspects of the design.

First, it gave me a sense of their overall aesthetic. They weren’t planning an entire interior overhaul, and they wanted the kitchen to match the house. It also told me about their values, which caused me to prioritize environmental choices and bring some more expensive options when I knew that they were of significantly superior construction.

Keeping the cupboards meant there was an area where the tiles couldn’t be easily terminated and needed to be installed down the wall between the dishwasher and the door.  Again, when they initially turned down my suggestion of how to handle this I had to dig for the “why.”

They worried that the tiles would be damaged by the steam and any splashing water from the dishwasher.  At the time, we had been discussing marble or terrazzo stone for the backsplash. Knowing their concern, I was able to suggest switching to back painted glass tiles (impervious to water!) and also illustrate the different ways to terminate the tiles if they ultimately chose not to tile down the wall. Ultimately, they decided that the look of continuous glass tile was preferable to the truncated terrazzo stone or marble option. 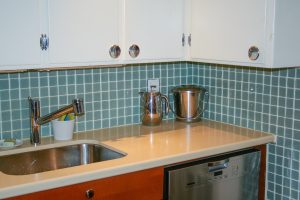 By digging into the reasoning behind the “no” we were able to work out a solution that addressed all the concerns and looked great. Although the kitchen renovations made some dramatic changes that included removing an interior wall, adding a window, and switching the fridge and stove placement, in the end it satisfied the client’s need for an open concept and their desire for a kitchen that was stylistically consistent with their century home.